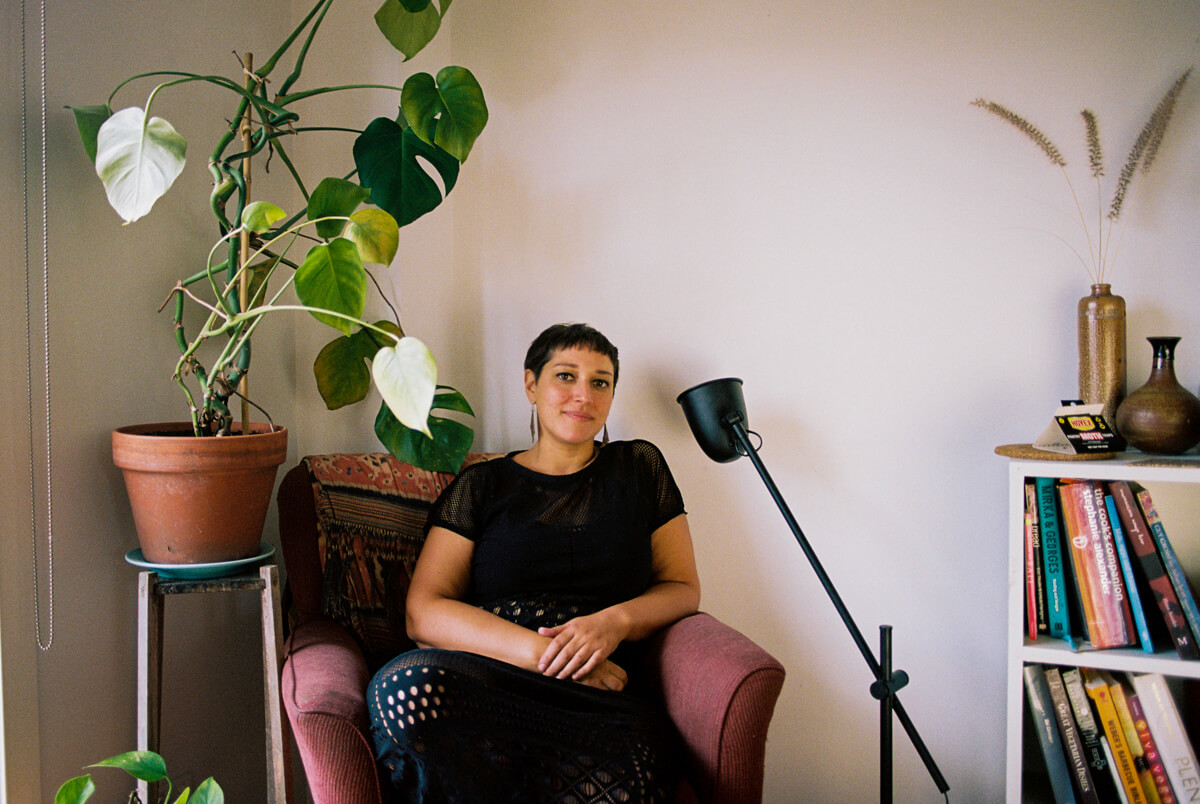 Later this month I’m moving to Sydney to take up the Peggy Glanville-Hicks residency for a year. I’ll be working on a new solo album and also different duo projects with Sydney-based artists. I’m hoping to put on lots of little house concerts at the Glanville-Hicks house in Paddington where I’ll be living. I’m also working on an Art Music Fund commission called ‘Stranger’ which looks into the potential of audiences as a temporary collective of massed sound makers through the use of video scores. ‘Stranger,’ is the development of an idea I first explored in a project I did last year called Vibrato Virtual. Chamber Made put out a call asking artists to think of ways liveness and the digital format could interact during this time and I became interested in the possibilities of people participating in making sounds together through the internet.

In Vibrato Virtual I made a series of audio tracks which the audience / participants played on their mobile phones at home. The audience was shown a video and asked to copy a series of physical gestures which included muting the phone speakers at certain moments to create rhythmic pulsations, and using their mouths to interact with the phone speaker. It was playful and simple for the audience to follow. I’m trying to find ways for people who aren’t necessarily musicians to engage in collective sound experiments. 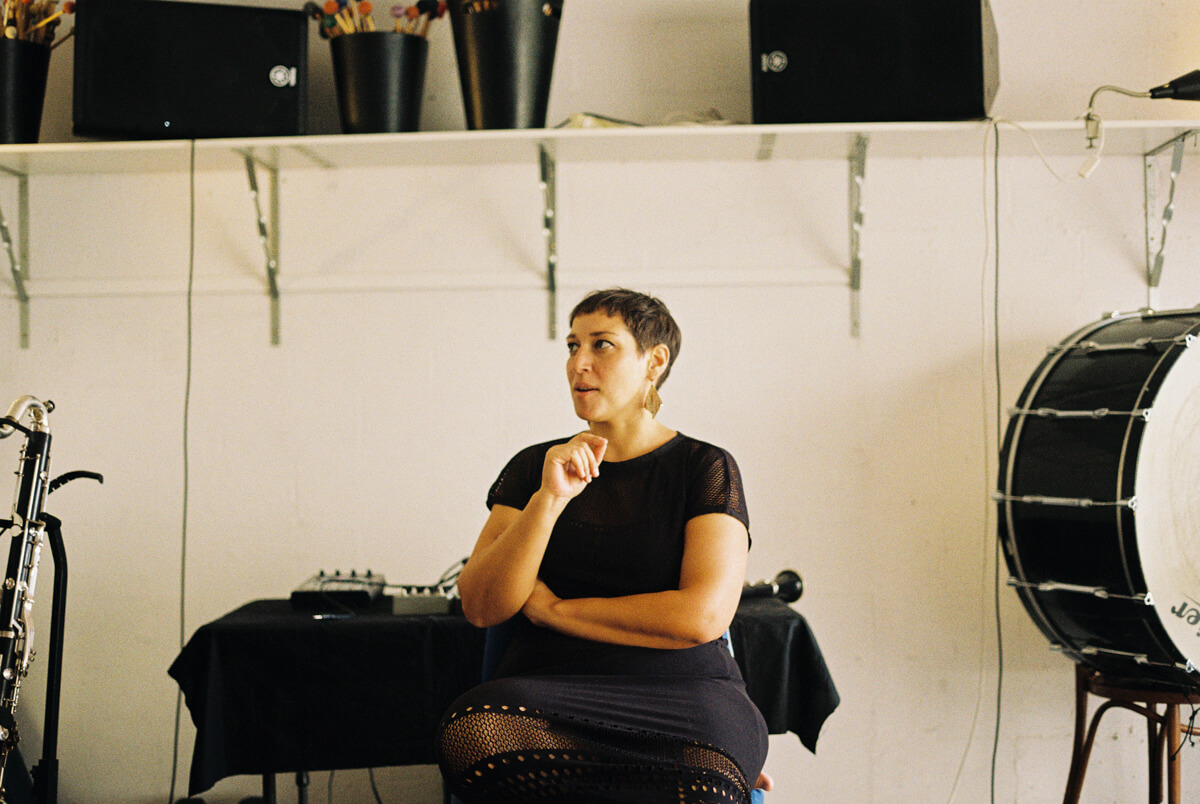 This kind of work is something that I have explored before in a few different pieces. I made a piece called ‘Ping Pong Pop’ for contrabass clarinet that evolved from this strange and hilarious idea that I could pop ping pong balls out of my contrabass clarinet! I made an elaborate performance piece where I was on a spinning platform surrounded by a bed of speakers playing dark ambient music and the audience had to try to shoot ping pong balls into my contrabass clarinet. If they managed to get one in it triggered a “success” sound similar to the sound a pinball or slot machine makes. Then I would have to try and ‘pop’ the ping pong balls out of the bell of my instrument by playing sharp accented sounds on my lowest ‘C’. All of the balls that didn't make the cut were bouncing around in the speaker cones. It was completely ridiculous.

I’m working on a new electro-acoustic set up for my next solo album. I’m not that much of a gear person, I’m much more of a tactile person, but I did get to explore and learn about a whole lot of gear when I was a resident at the Banff Centre for Arts and Creativity at the end of 2019. I was there for six weeks and there were a lot of different musicians there from all over the world and I got to play with them and try out lots of different equipment like samplers and pedals. It was great because I could just borrow gear from other artists and really experiment with what worked for me. I loved that process because I’m not really someone who is into learning about gear on the internet, from YouTube or something, I much prefer to just try playing with different equipment and see how it feels. 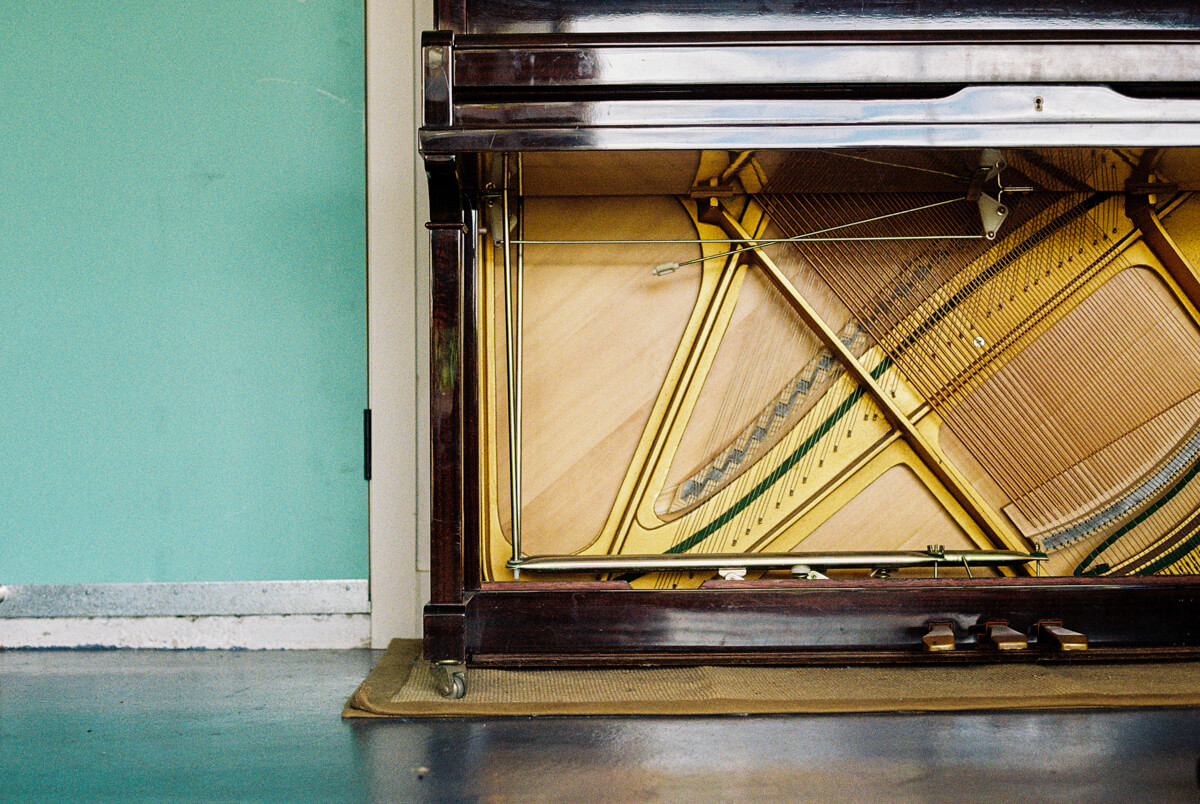 I trained within the classical tradition, but I’ve always played in bands. Then at Uni I became interested in the contemporary classical music, and graphic and text-based scores that require the musicians to generate musical material. My first experience of free-improvisation was at the Vancouver Creative Institute where I went to study with the clarinettist François Houle and a whole lot of other world-renowned improvisers including Evan Parker, so that was a real dive in the deep end for me and I absolutely loved it.

Another transformative experience for me was the first artist residency I attended as a solo artist. I went to the OMI International Art Centre in upstate New York and it was there that I realised how incredible a residency can be in terms of expanding and developing your artistic practice. At that residency there were 17 other people. Everyone was from a different country and brought an incredible wealth of knowledge to this shared forum. 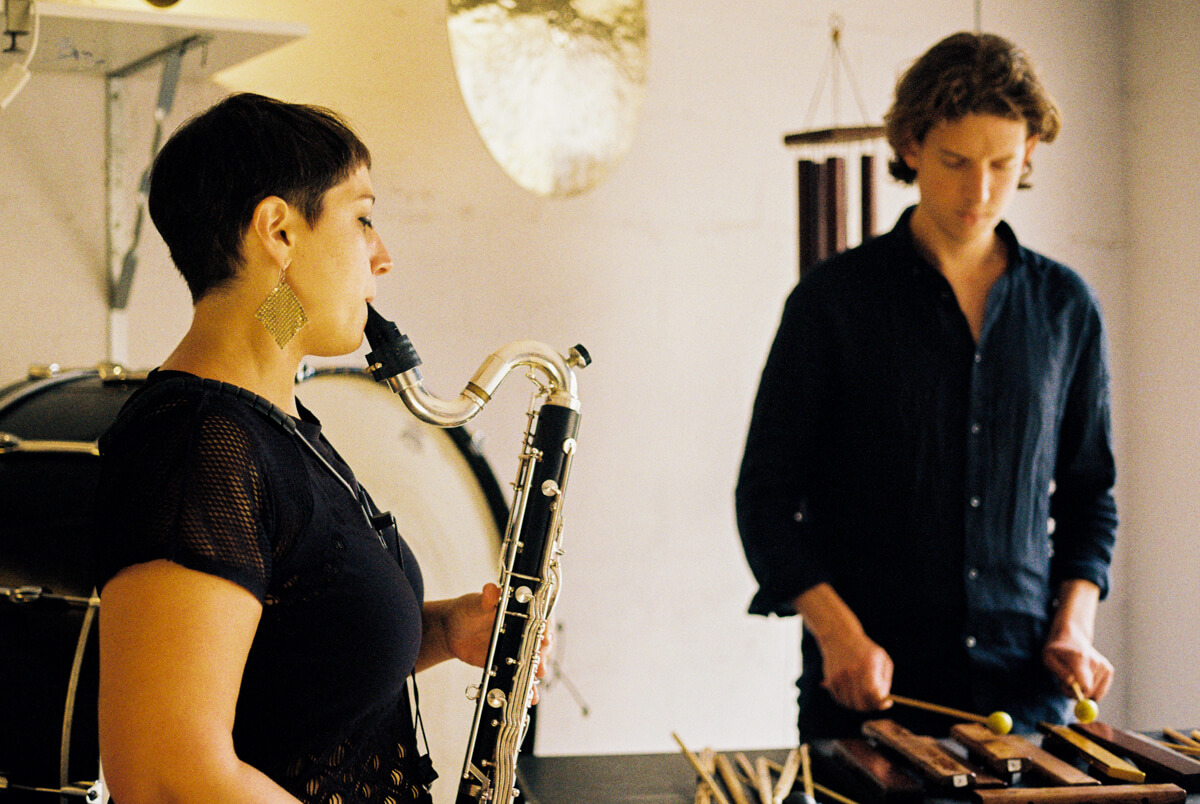 One of the best things I did during the lockdown was a collaboration with my housemate Matthias Schack-Arnott for The Substation. We worked on this project during the second lockdown, so it had been a long time since I’d played with another musician live. It was so fun to be playing music together in the same space, playing in the same room, hearing the same cars pass by, rain coming out of the gutter. I had tried other modes of collaborating during lockdown, sending files back and forth, and online zoom jams, but playing live with Matthias was so refreshing and exciting.

My first gig post-lockdown was playing in an old slate quarry near Castlemaine for a pilot performance of a work called Sonic Outcrops. I was playing from a hidden location behind a rock within this really unique acoustic, playing for a small audience of 12 people, so that was a nice, gentle way back into performing again. My next performance will be playing in front of the Melbourne Symphony Orchestra with my Australian Art Orchestra colleagues. I’ve never played in front of an orchestra before it will be interesting playing a gig like that after not performing for such a long time. 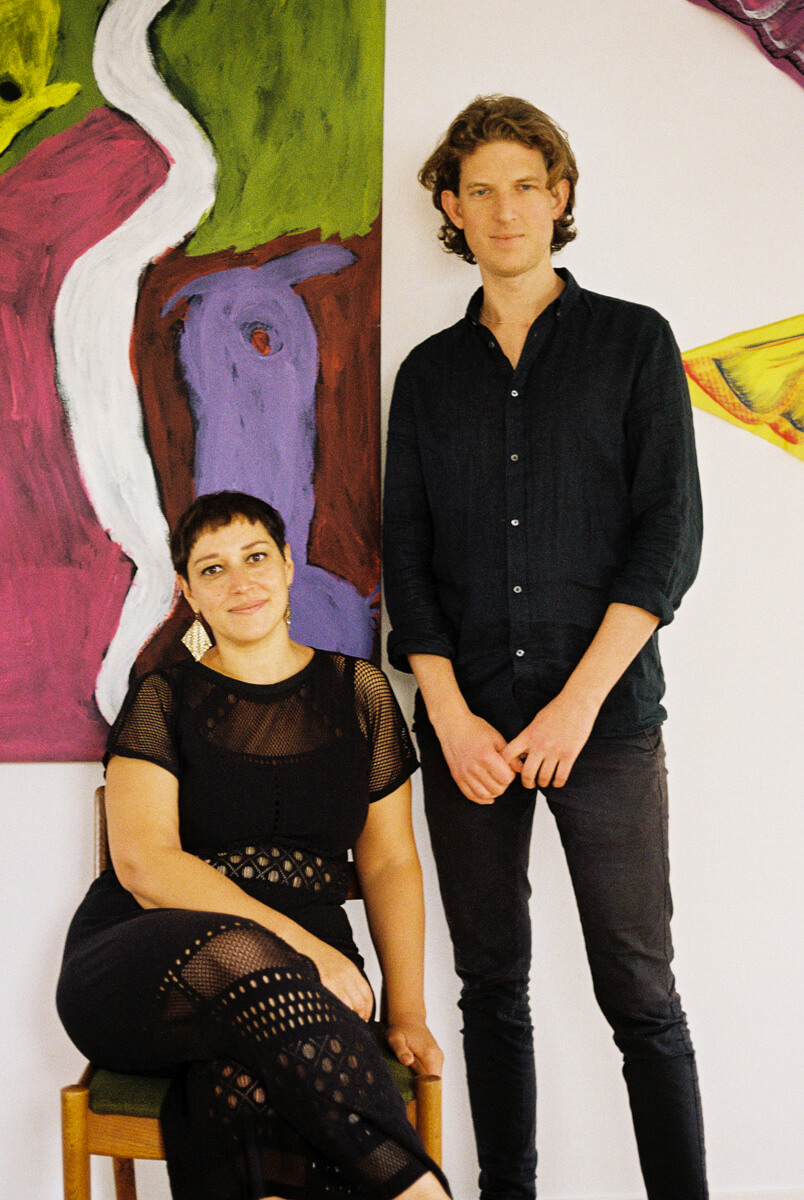 I’m also doing sound and composition for a few shows this year. One is called ‘Rewards For The Tribe’ and it is a collaboration between Chunky Move and Restless Dance Theatre. I’m also in the early research stage of a project with another of my housemates (theatre maker Samara Hersch) and Lara Thoms called ‘Please Stand’, which looks at our relationship to the history and protest surrounding national anthems.

Someone who I’ve always been really inspired by is the artist Jim Denley who is based in Sydney. I’m looking forward to spending more time with him this year. Jim is an amazing wind player, but he has also spent a lot of time investigating something that I'm really interested in at the moment which is what it means to play outdoors in Australia and what it means to play a wind instrument in Australia. 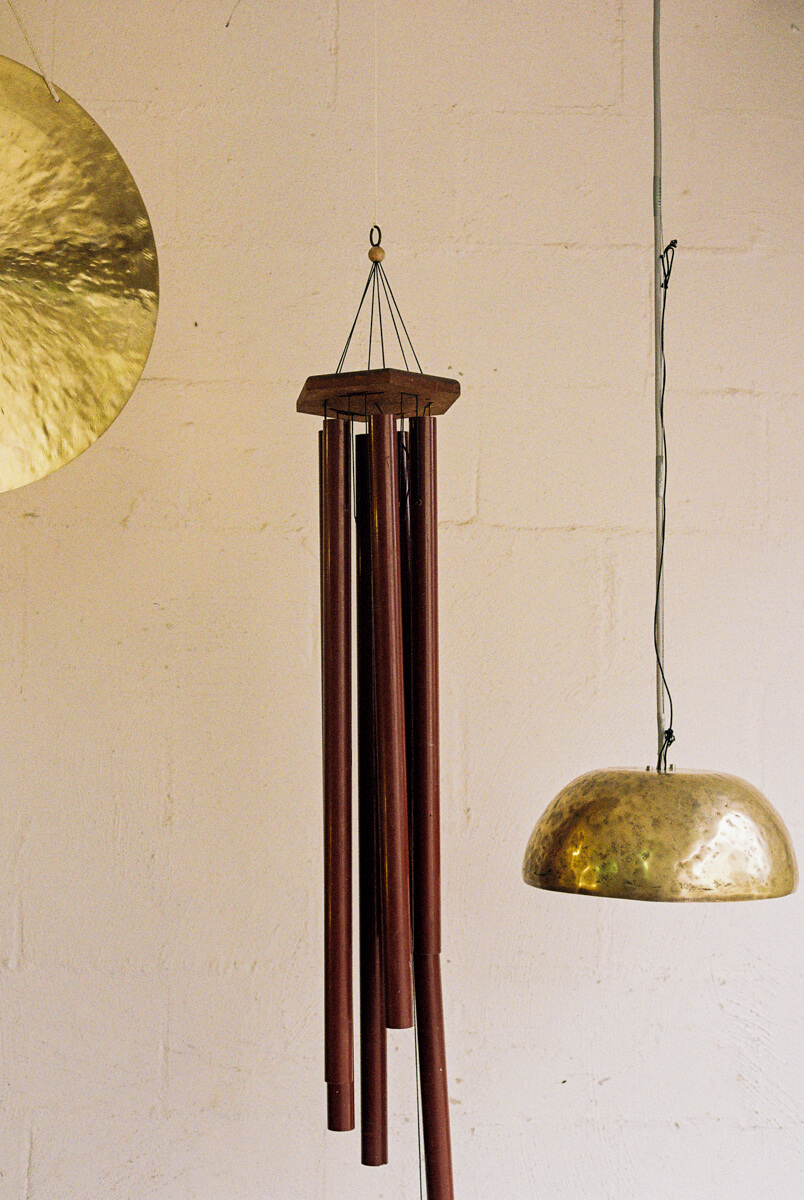 I started to become fascinated by playing outdoors when I did a residency at The Unconformity in Western Tasmania. That’s a part of the world that has been heavily mined, and I was interested in playing in some of the mine sites. I had the chance to play in an underground shaft that is a remnant of an ex- gold mine, and at the Iron Blow which is a massive open cut mine just outside of Queenstown, and then I was able to continue this practice at the old slate quarry near Castlemaine. These are parts of the land that have suffered enormous devastation, but in their wake have created acoustics that wouldn’t have been there otherwise. I started to feel like there is something hopeful and optimistic about caring for sound within those sites, and trying to find a way to play there. These spaces are interesting acoustically but they also make me think about settler impact on the land and make me question my own presence there, and my presence there with my European instruments. 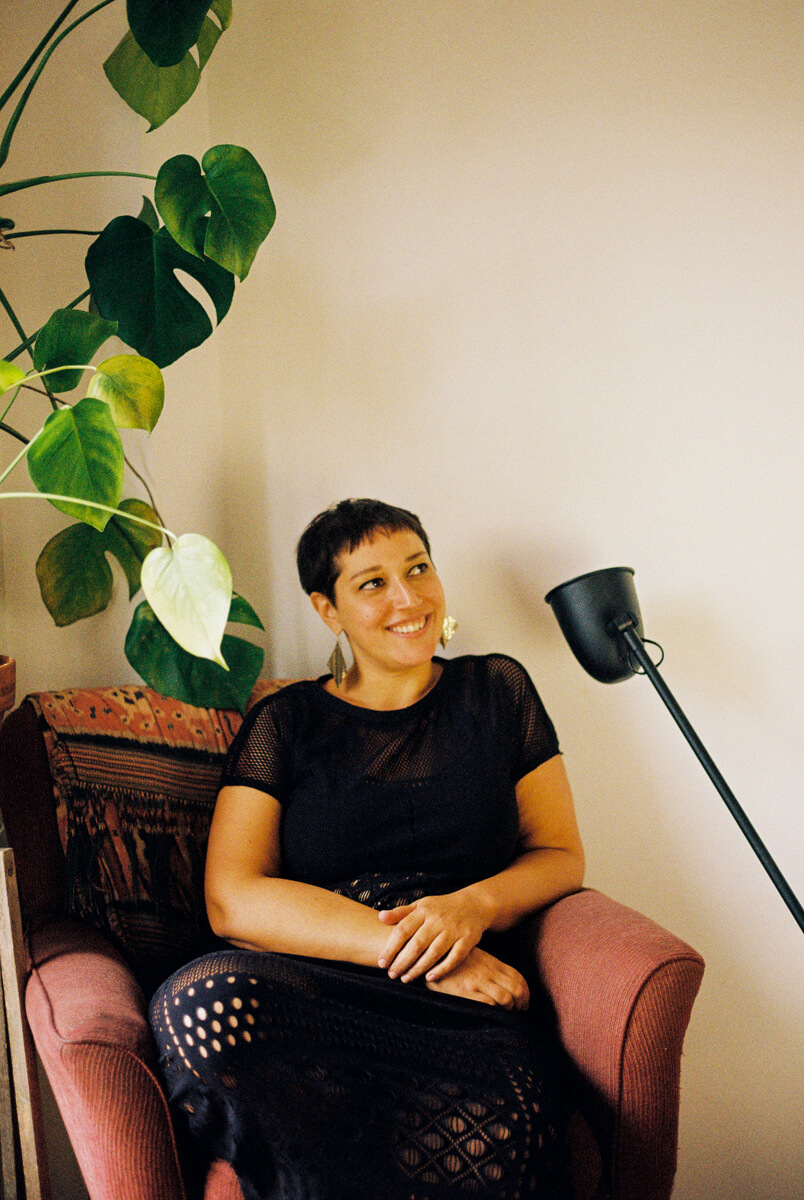 Playing in these different acoustic environments and soundscapes really teaches you how to play in a different way. I noticed that I developed particular sounds or ways of playing that I wouldn’t have otherwise. These outdoors spaces really pushed me as a musician and opened up new possibilities and made me listen in a different way. They helped to discover things about my instrument that I didn’t know. It’s not just about the spaces, but it might also be about who else is there… insects, birds, and the sounds they are making and listening to. Sometimes for example I hear cicadas, and it’s not about necessarily trying to imitate their sound, but just acknowledging their presence and thinking about how we exist in parallel with them.