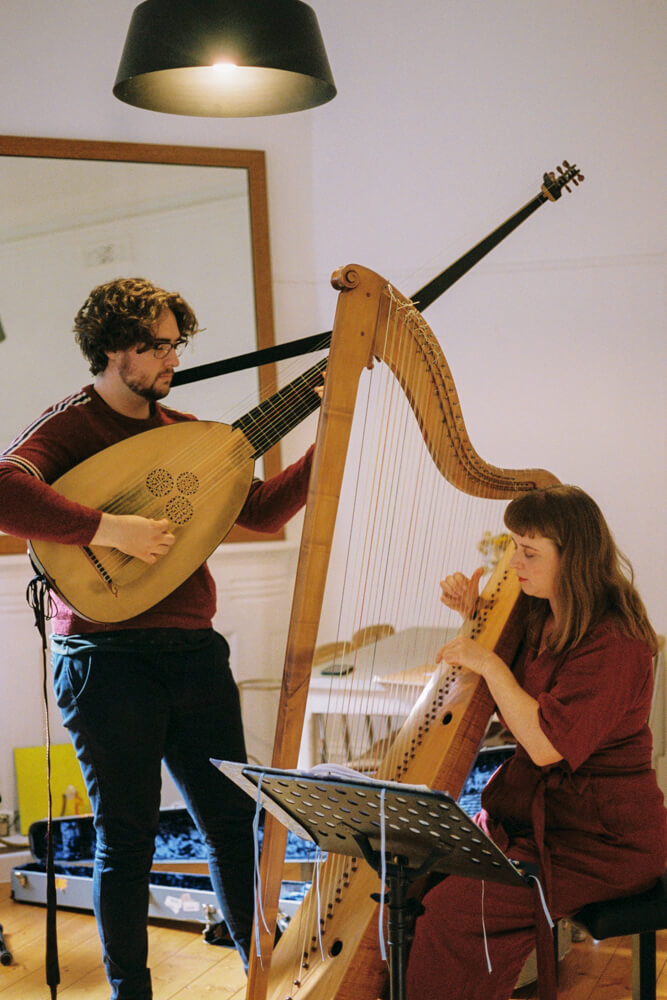 You play on Baroque instruments. Can you tell us about them?

For 16th/17th century plucked string instruments we play on copies of historical instruments since these instruments are fragile so we cannot play on originals!

My Italian baroque triple harp was made for me in 2014 by the German historical harp maker Claüs Huttel. This instrument originated in Italy at the beginning of the 17th-century and was then used throughout Europe. It has three parallel rows of strings, the two outer rows are diatonic and doubled, which creates a rich resonance and allows for all kinds of arpeggiation, and the middle row contains all the chromatic notes. It is common for makers of historical instruments to take inspiration from extant instruments in museums and depictions in paintings. My harp is inspired by the harp in a very beautiful 17th-century Italian painting by Carlo Francesco Nuvolone ‘The Artist and his Family’, which is in the collection of the Pinacoteca di Brera, Milan.

Nick has an ever-expanding instrument collection as different repertoires demand different kinds of instruments from the lute and guitar family throughout the 15th—18th centuries but for this performance he will be playing his theorbo and baroque guitar. The theorbo is an instrument that was adapted from the bass lutes of the mid 16th-century. With the rise of opera and the increasing popularity of monody, the theorbo became one of the primary accompanying instruments in ensembles of all sizes. Despite its accompaniment focus, the theorbo also had a rich tradition of solo and duo music. The instrument stayed in use well into the late 18th century where it was used regularly in church music and arias in both cantatas and operas. Nick’s theorbo was built in London by Klaus Jacobsen in 2011 and is based on a set of surviving designs from an anonymous Venetian instrument.

The baroque guitar is the direct descendant of the modern classical guitar. Guitars of all types were popular throughout Europe from the 15th century. While most commonly associated with Spain, the instrument was incredibly popular in Italy and France where many of its most prominent composers worked and taught. Unlike the classical guitar, the baroque guitar has five pairs of strings tuned in the same notes as the top 5 strings of the guitar. Nick’s guitar was built in 2001 by Peter Biffin in Armadale NSW. 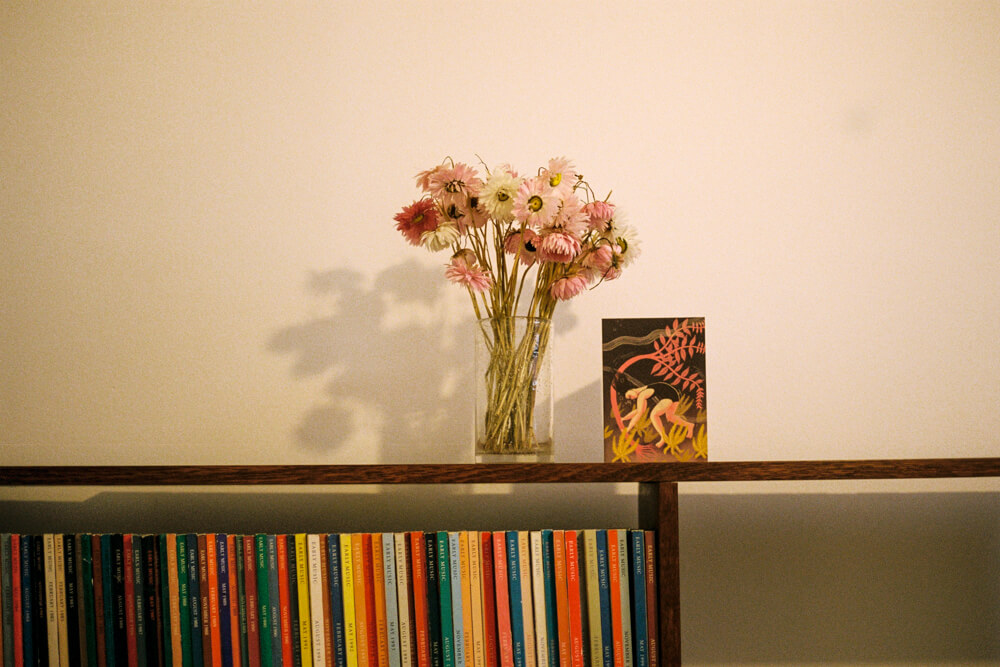 What are the biggest differences between playing early music and later western art music repertoire?

One big difference is in the interpretation of the score. In early music, we view the score as being generally descriptive, which is to say that the notes only give an idea of the final execution so it falls to the performer(s) to use their training to add in everything missing between the dots. In much of western art music, the score is more prescriptive and is, therefore, more complete.

One example of this is the art of basso continuo - which is fundamental to the practice of our instruments and the performance of baroque music in general. This is a historical improvisatory practice used for music of the late-16th—18th centuries, where we play from a single bass line to accompany and create a dialogue with the upper parts (voices/instruments). The basso continuo part is therefore not through-composed: we have to make decisions about how to realise this part, both harmonically and figuratively, using our knowledge of counterpoint, style and the emotional and rhetorical intent of the music.

This possibility for improvisation means that every performance can be different because we have the space to make musical decisions spontaneously, which is exciting! In the 17th century they did develop a shorthand to make it easier for performers to read the harmony, a numbering system called ‘figured bass’ which indicates the pitches to be played above the bass line. It’s where we take the name for our ensemble: ‘642’ creates a crunchy dominant harmony, which you will hear in our performances. 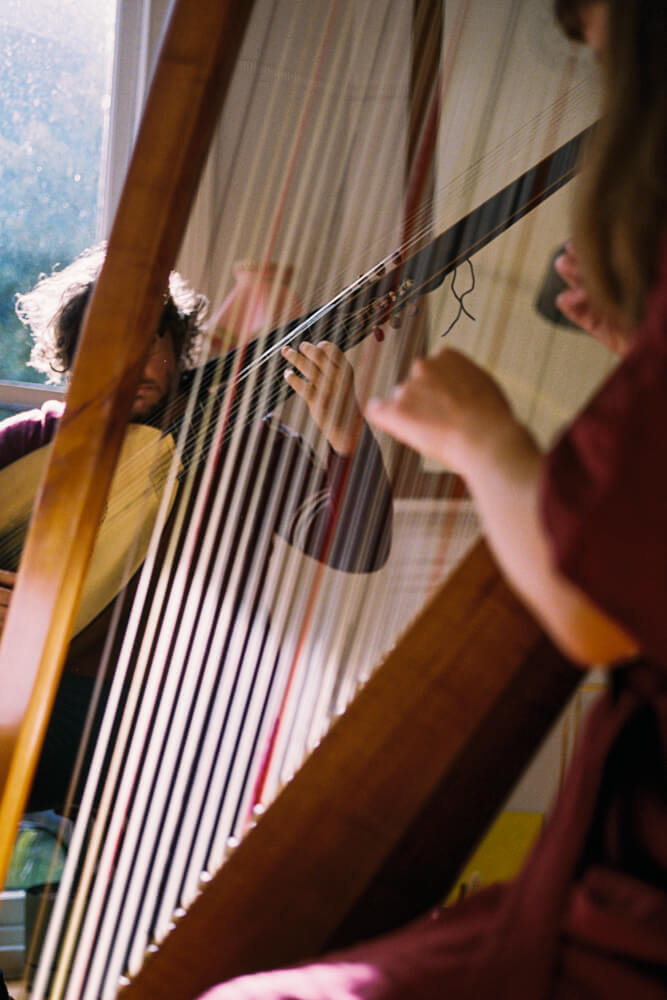 Who are your greatest creative and musical influences?

Composers are often our greatest influence. We are constantly inspired by the musical invention and beauty contained within the works we perform and how we can communicate this to an audience. In our role as basso continuo players, we also have some agency in the creation of the music from a compositional perspective, so understanding the artistry, technique and style of each composer enables us to do this in a more meaningful way. We research their lives and the times they lived in, every bit of detail —understanding the historical and social context for their music—adds another layer to the music making. It is an endless and endlessly fascinating creative task.‍

Do you have a preference for chamber music or orchestral music playing?‍ 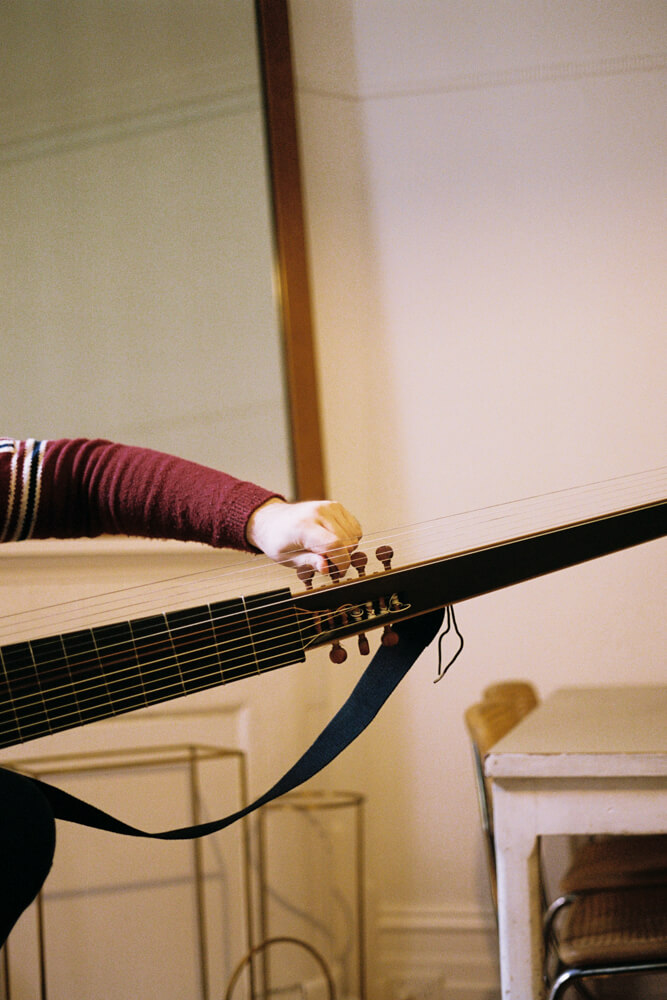 We are preparing our first recording project ‘Plucked’, which will be out later this year. This was something dreamed up during the first lockdown in 2020 and we’re able to realise it thanks to a matched funding program through the Australian Cultural Fund and the generosity of many wonderful supporters! Rather than a CD, we’ve decided to release individual tracks digitally with some accompanying video. The music will span the 17th and 18th centuries, it’s a chance for us to share music that has been an ongoing inspiration in our collaboration and we’re inviting some of our favourite guest artists to join us. Stay tuned! 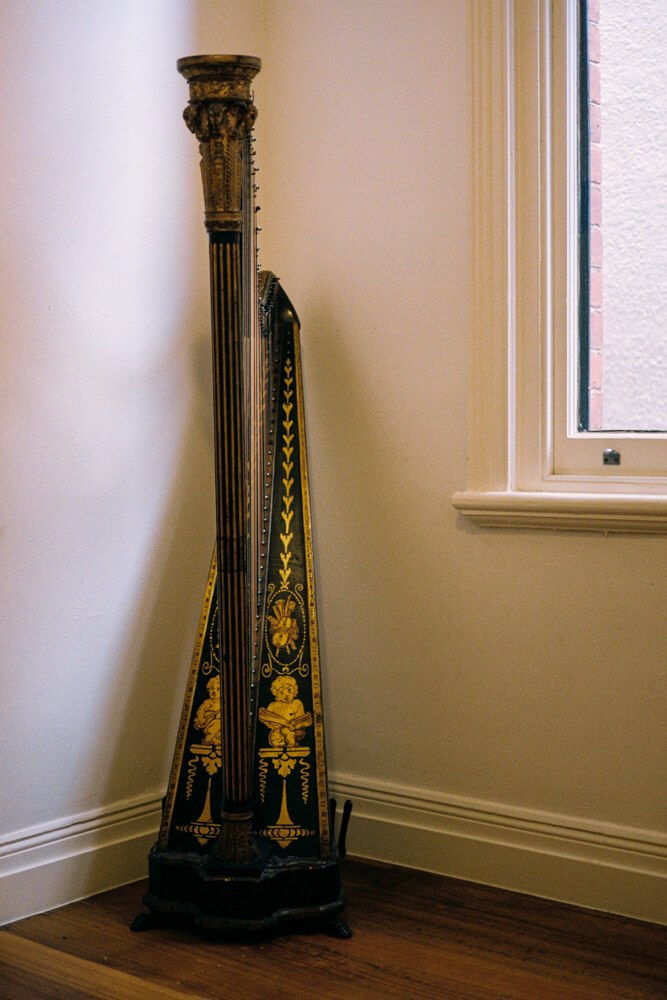 What has been your favourite work to work on over the years?

Anything by the 17th-century Italian composer Claudio Monteverdi! We met in 2014 playing next to each other in a student production of his opera ‘L’Orfeo’ and our next gig together was his sublime Marian Vespers of 1610. Since then we’ve played his operas and madrigals in professional productions and programmed his vocal works in our own concerts, our love of his music has been a constant thread in the ensemble. He was groundbreaking in creating a new genre of dramatic music — composing some of the earliest operas and staged musical works— in his incredibly emotive setting of text, harmonic language, and pushing the boundaries of established forms. He caused quite a lot of artistic controversy in his time for what was perceived as his blatant disregard for received musical convention but was respected as an absolute master of his art! Above all there is a profound humanity in his music which transcends centuries. In general it is this opportunity to explore the continuum of human emotion and experience that drives us in our dedication to the performance of early music. We always come back to ‘L’Orfeo’ as a source of inspiration. It is an important work for  our instruments, as it is one of the few works in this period that has very specific orchestration and it is a story of the power of music and the fragility and imperfection of human existence. 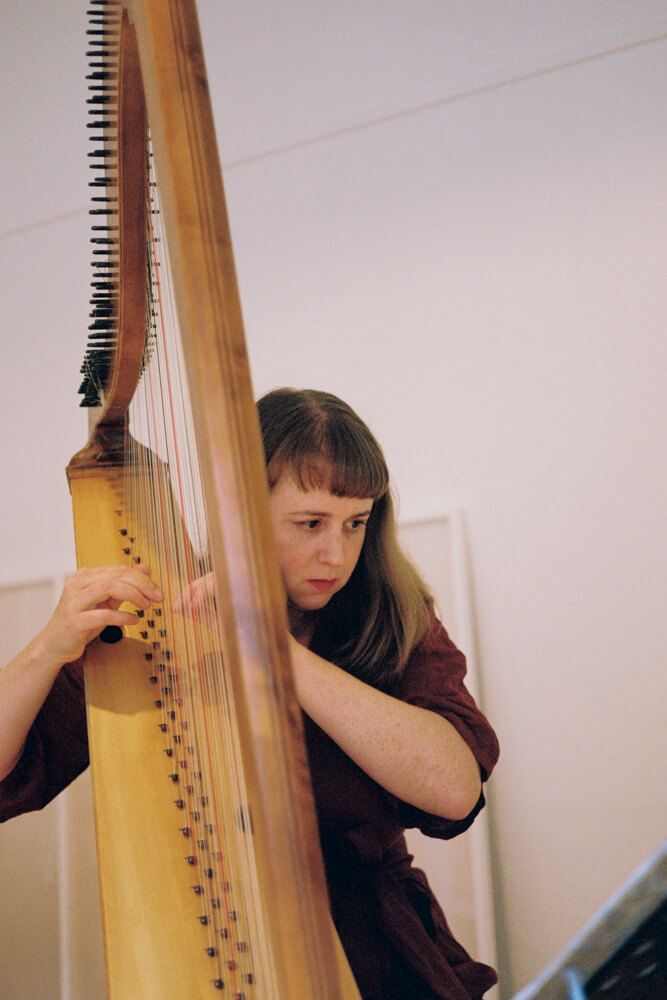 Can you tell us a bit about the program you'll be presenting at Play On this Saturday?

This program is a bit like our personal 17th century playlist, where we’ll go on a journey to Italy and Spain exploring different moods and musical genres. What is so fantastic about this period in Western music is the incredible diversity in musical forms and styles. The late-16th and early 17th-century — particularly in Italy — was a truly modern era in terms of musical invention and experimentation, with the birth of opera and virtuosic instrumental music and intense philosophical discourse around music and art. We’ll be contrasting Italian forms such as the canzona, which features intricate counterpoint, and the toccata, which is often extravagant with surprising harmonic shifts, with popular dance music from the Iberian peninsula. You’ll hear our instruments (baroque triple harp, theorbo, baroque guitar) in their diverse functions, with both of us playing through-composed music, taking turns to play basso continuo to accompany each other and also some solo pieces to demonstrate the unique timbre and musical idiom of each instrument.

Ensemble 642 performs at Play On this Saturday 17th April. Find the event here.