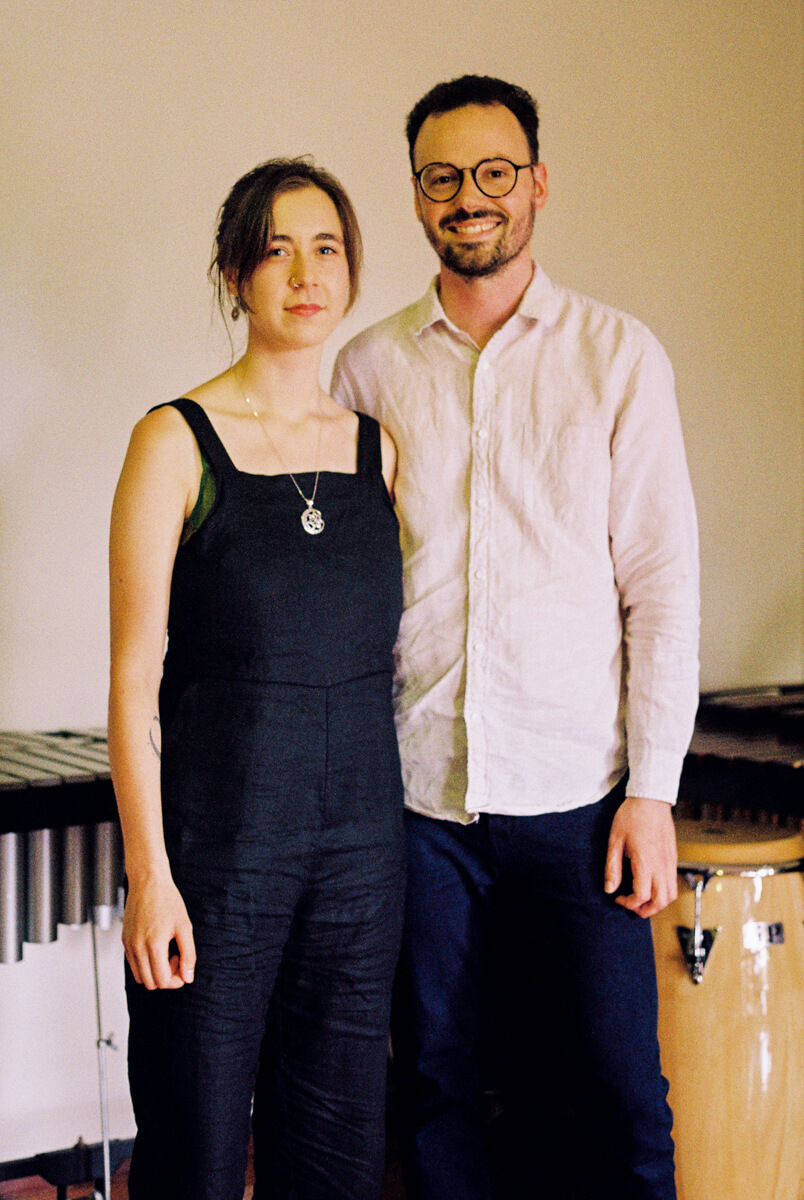 Hamish: We moved house during the second lockdown in 2020, so that meant we were pretty focused on getting our new place and instruments setup, which was a nice distraction. Once we were settled, we made a lot of music, and did some online shows.

Zela: I was asked to do Make It Up Club by Aviva Endean. The gig was shortly after we’d moved into our new place, so it was great to have a gig to christen the house with. We made our home the central focus of the set and tried to really incorporate our house and its various spaces into the performance.

Zela: During the first lockdown I was living with my family. They live out in the suburbs surrounded by lots of trees and native bush, so I went on a lot of walks and was very inspired by the beautiful surroundings. I received one of Speak Percussion’s SD commissions and was paired with composer/musician Cayn Borthwick. Collaborating with Cayn remotely was really cool because he introduced me to some new music-making technologies from a company that he’s involved with called Playable Streets. 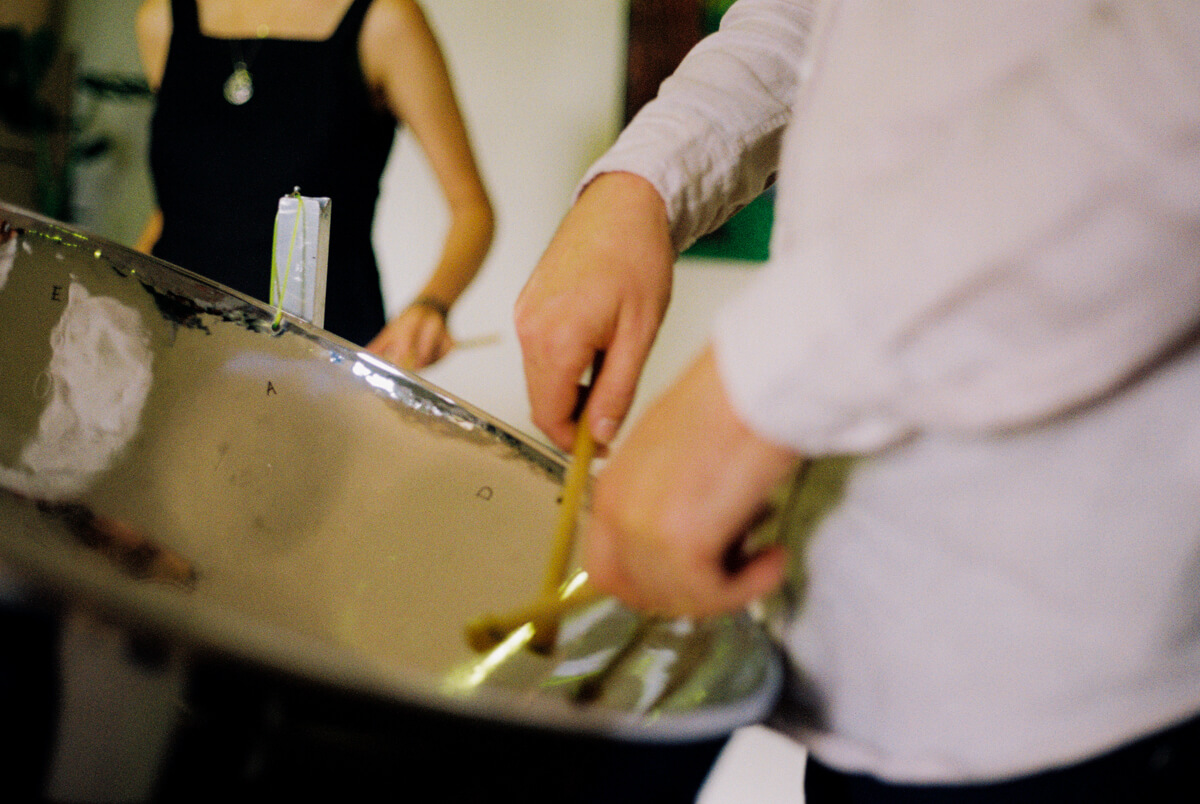 What was the technology?

Zela: Conductive technology, so we could turn household objects into midi triggers. We created an audio-visual work inspired by playing board games virtually but also in person and heavily based on isolation. Playing with conductive technology as an instrument meant that physical touch became a central theme of the work, which felt particularly relevant during the early stages of lockdown.

Hamish: I was part of the second round of Speak Percussion’s SD series commissions and I was paired with Sydney-based percussionist Niki Johnson. We worked on a duo incorporating Niki’s handmade ceramic instruments and I experimented with making giant bamboo guiros. We met several times on zoom to discuss ideas, and sent recordings back and forth to get a sense of how the sounds could work together. We’re looking to custom build setups and develop the work further in the coming year.

Have you two been working together?

Hamish: Yes. Luckily we are both into the same music. We both come from an orchestral training background but are really interested in exploring experimental percussion music. We listen to a lot of experimental music, as well as pop music. It’s pretty awesome being able to share instruments and play concerts together! 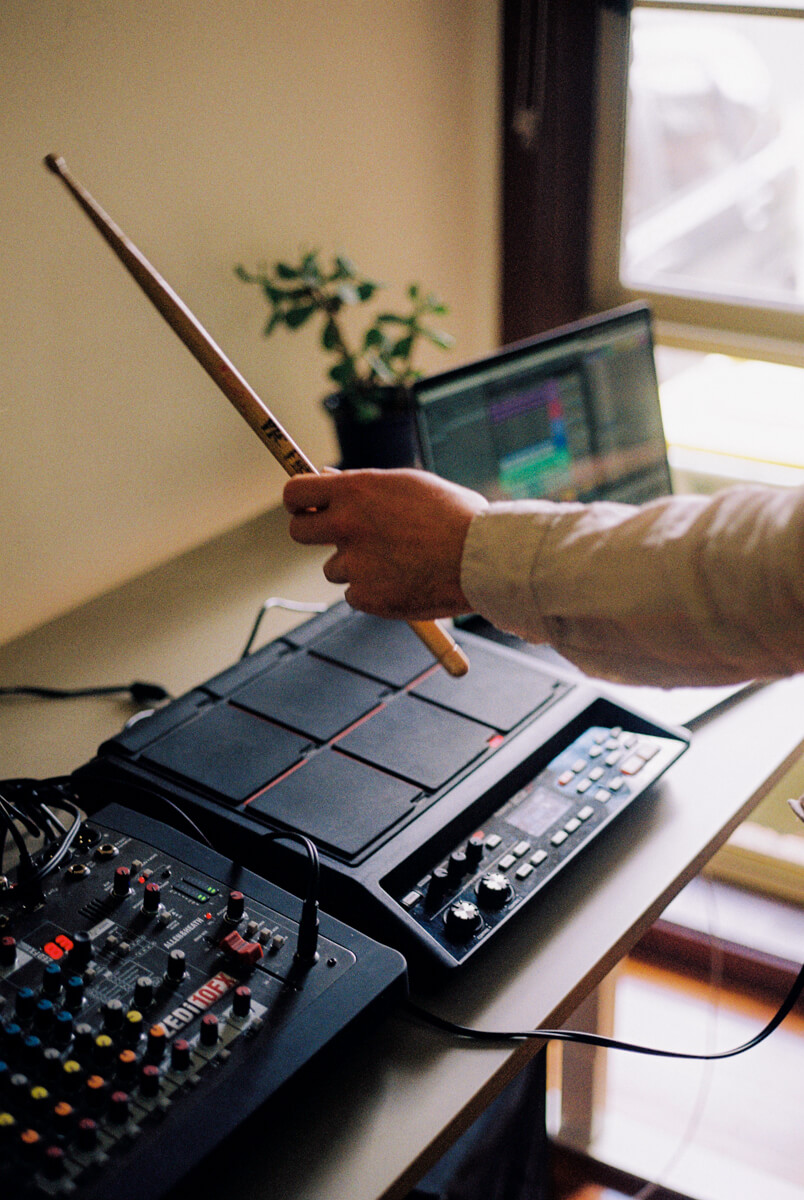 You mentioned you are from an orchestral background. Do you still play a lot of orchestral music?

Hamish: Not as much as I used to! There’ll be an occasional gig, but they are few and far between now.

Zela: I'm personally not chasing an orchestral job but there is always something special about playing in a large ensemble, so I’m usually pretty keen if something comes up.

What is your favourite orchestral piece to play?

Hamish: For me that’s got to be the Turangalîla Symphony by Olivier Messiaen. It has a 12-part percussion section and I’ve been lucky enough to play it twice, on different percussion parts each time. The piece has so many different sounds and there’s the opportunity to go absolutely berserk in terms of dynamic range. There's a massive tam tam roll at the end that gets super loud, it felt a bit like firing up a jet engine when I was playing it.

Zela: I’ve played in Stravinsky’s Firebird a couple of times, it’s such a beautiful piece! But my orchestral highlight would definitely be playing timpani in Brett Dean’s Fire Music while I was at University. I’m pretty sure Carolyn Schofield played keyboard in the orchestra for that work too.

Hamish: Zela and I met playing in a brass and percussion ensemble arrangement of Alpine Symphony by Strauss.

Zela: Alpine is probably one of my favourite orchestral works too. 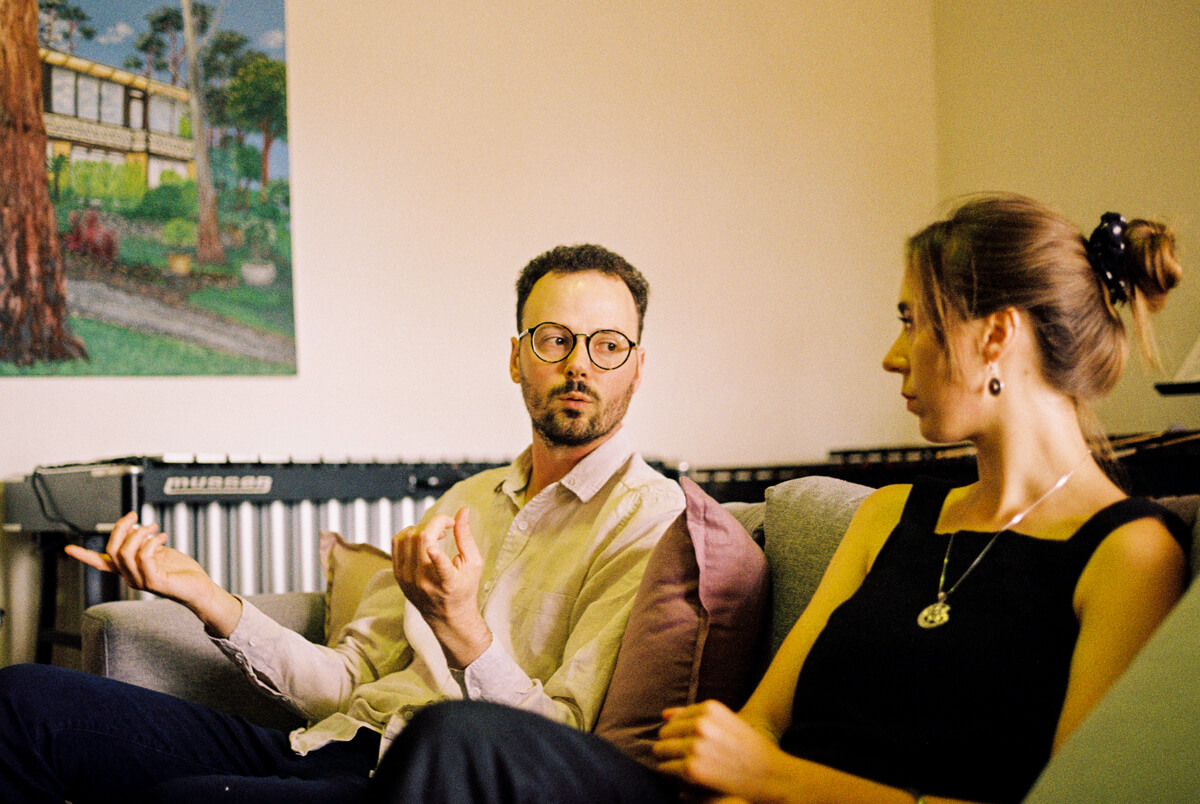 What is your favourite gear at the moment?

Hamish: Well, we love our vibraphone. We got it second hand off eBay and it was delivered by furniture movers from Sydney in a gigantic flight case.

Hamish: I've recently started learning my way around the steel pan drum. I commissioned my own steel pan to be made, and it can also be heard on the last track of Flashed Glass with Sleep D and Ad Lib Collective.‍

How was the collaboration you were part of with the Ad Lib Collective and Sleep D?‍

Hamish: The first gig [in 2019] was one of the craziest experiences, I think one of the most fun nights ever.

Zela: That performance was definitely the highlight of my career so far! We were able to completely let loose and respond to the crowd. I listen to a lot of electronic music and love going to gigs so it was pretty special and exciting to be part of this performance.

Hamish: The collaboration saw us really feeding off each other. We have very different ways of working. Sleep D has this amazing way of thinking about sound, which is so different to the way we usually rehearse and put together pieces. Collaborating meant that our musical worlds could cross over in a really interesting way.

Zela: We spent our initial rehearsal time developing an improvisational language together, using visual references and drawing shapes. We even referenced films to share a sense of how we wanted the music to sound and feel. This language also became our collaborative foundations for developing the LP Flashed Glass. We continued working this way in the studio in early 2020 when we first started the album, one track was even inspired by a dessert flavour!

While the tracks Chambers, Lagoon, and Enclave were all created from scratch in the studio, the other three tracks were actually made during isolation. For these ones we had a different approach, Corey and Maryos [Sleep D] sent us three tracks that they had been working on which we then added to.

Hamish: I was paired with Jesse Deane on Saxophone for the track Shelter, which we recorded during stage 4 restrictions from home. We discussed a rough structure of how we wanted to do it, and I picked Steel Pan to go with his sax, and the rest of the process was really smooth. Jesse is so fantastic to improvise with.

Zela: - Oh yeah, we [Ad Lib Collective] divided into pairs for these to make the process of collaborating remotely a bit easier, which ended up being really cool and effective! Those three lockdown tracks became very different from each other due to the instrumentation. I was paired with the amazing violist Jared Yapp for Cavern. He created his part first, which I then added to with some chords and melodies on the vibraphone and some effects with the waterphone. 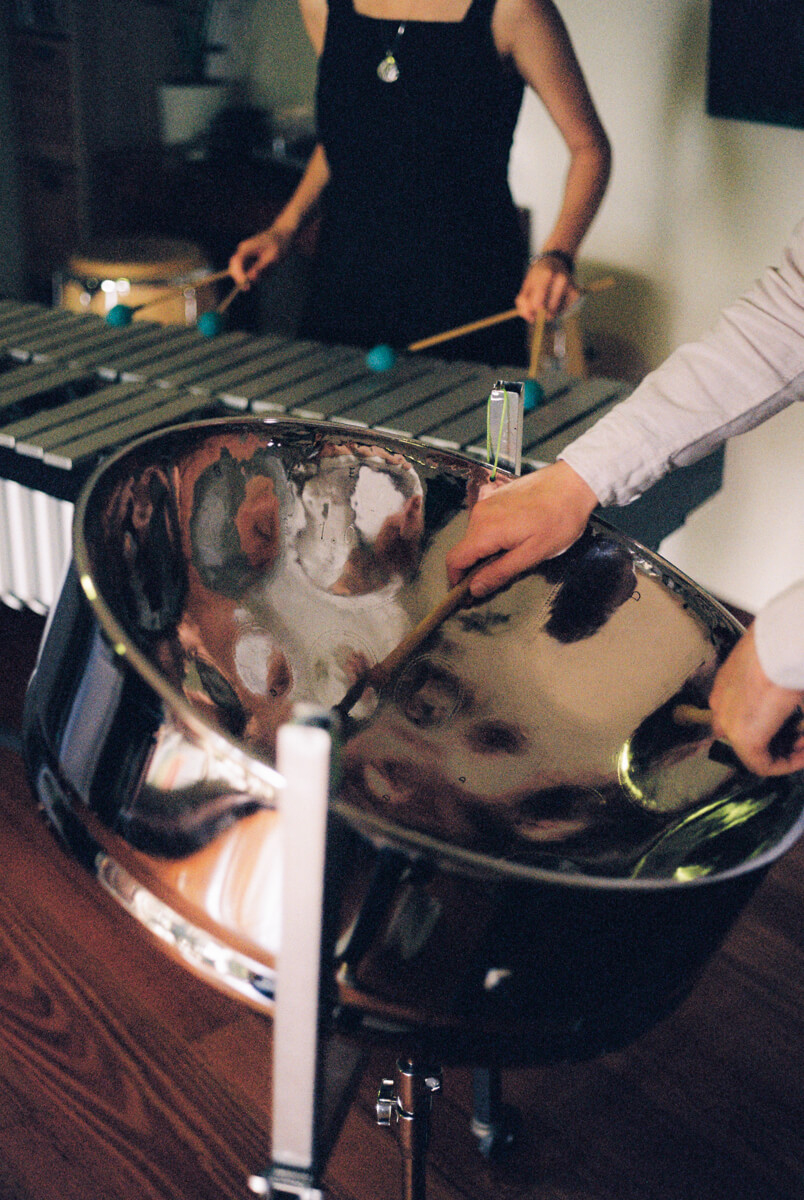 What is the greatest influence on your work?

Zela: Collaboration! My musical identity has definitely developed through the creative experiences that I’ve shared with others. I’m also artistically influenced by my surroundings, whether that’s natural surroundings or the things that are going on.

I also have to mention Speak Percussion! I first attended a Speak performance towards the end of year 12, when I was still wasn’t sure about what to do after high school. I hadn’t experienced contemporary/experimental percussion before that and I was completely inspired. Since then, I’ve been really lucky to participate in their emerging artist programs and am currently receiving artistic support through the Bespoke Artist program.

One of the most significant changes that happened in the past year was when I started working at JOLT arts, a Community Arts company that presents new work and mentors artists with disabilities. JOLT is directed by James Hullick, and I do a mixture of administrative and mentoring work with him. Hullick will just take on anything and is constantly creative - he just keeps punching out work all the time. So, he's a big influence over the last few years since I received a career development grant with him as my mentor. He’s really opened me up to the concept of boundless creativity that I want to try and strive for as I keep going through my music career. I’ve also learnt the bulk of what I know about grant writing from him! 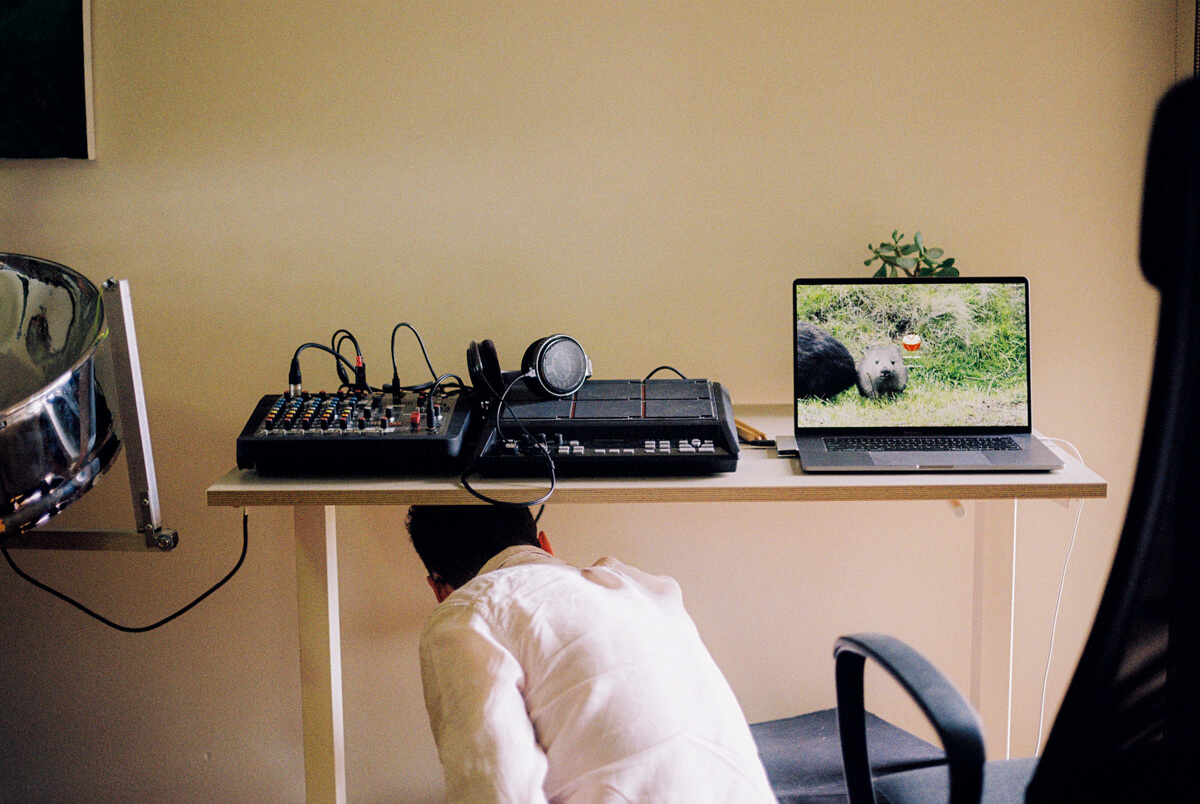 Do you have a dream gig?

H + Z: The collaboration with Sleep D was a dream gig!

Hamish: Another dream gig would be to curate and play in a festival in a forest in New Zealand. I grew up in the northern region of the South Island, and I’d frequently visit Nelson Lakes National Park. I don't know that there's ever been an experimental music festival there before, but it’s a small mountain village that I reckon is the perfect place for it, as there’s lots of indoor/outdoor venues that could host different performances and installations. There’s a beautiful park area down by the lake and surrounded by amazing trees - I can imagine there’d be amazing potential to put on an immersive art experience that would just be pure magic. 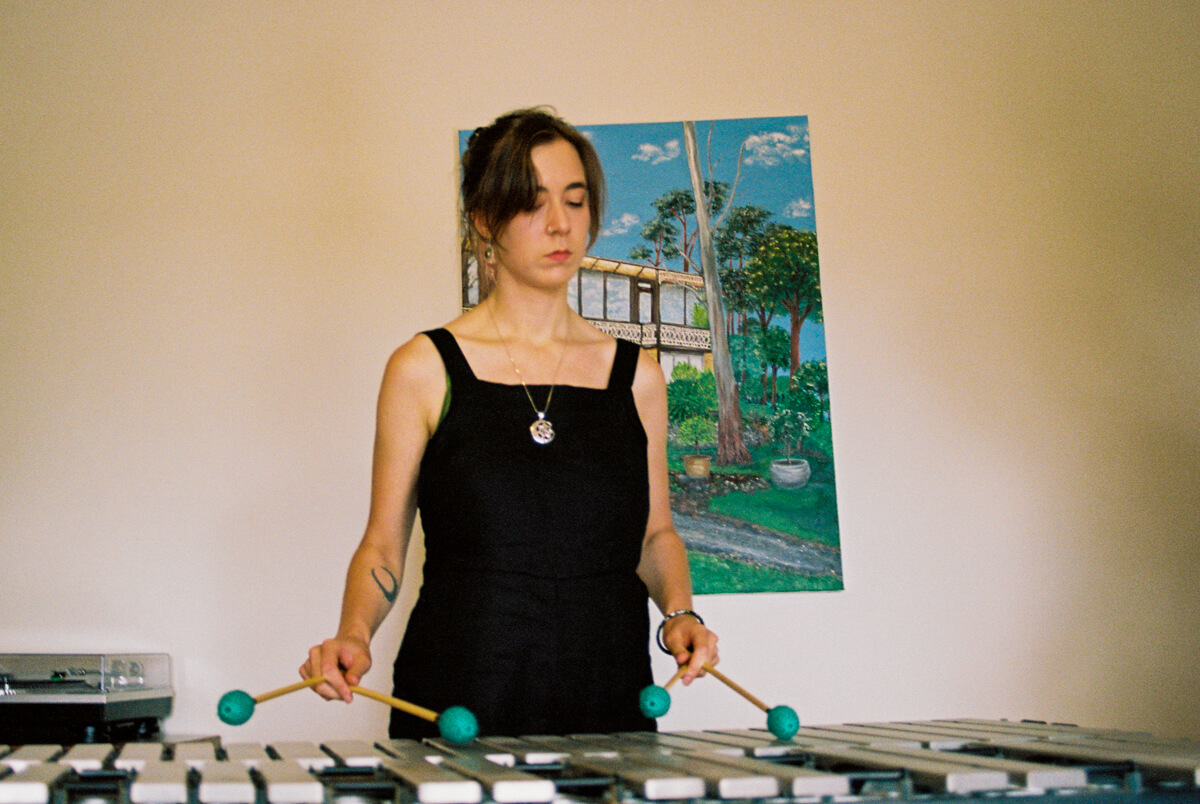 How has lockdown 4.0 been for you both?

Zela: This lockdown has been particularly difficult with the cancellation of RISING festival and the album launch with Sleep D. It felt pretty surreal tuning into the press conference on Monday during our first rehearsal. The last time that Ad Lib Collective and Sleep D were a room together was at Head Gap studio in March 2020 when Covid-19 news was just starting to unfold, so there was certainly a sense of deja vu.

Hamish: I was also supposed to fly to NZ on Wednesday 2nd June to see my parents, 2 brothers and nephew. It’s disappointing but I can rebook and go again when things get back under control!

Zela: This is my first lockdown as a percussion teacher, so I’m quickly learning how to make that happen while Hamish settles back into the routine, he’s a total pro at it now! We’ve also re-organized our percussion cupboard and sorted out all our sticks and mallets.

Zela: We just adopted a second rabbit, River, to keep our bun Niro company. Niro was adopted in the first lockdown, so there’s a bit of a trend happening... Watching them get to know each other has been a very cute distraction! We’ve also been listening to PBS a lot, the sense of community that you get from listening to live radio is really helpful in challenging times.

Hamish: We also made a chocolate self-saucing pudding to enjoy over the next few nights of lockdown - good food always helps us get through!